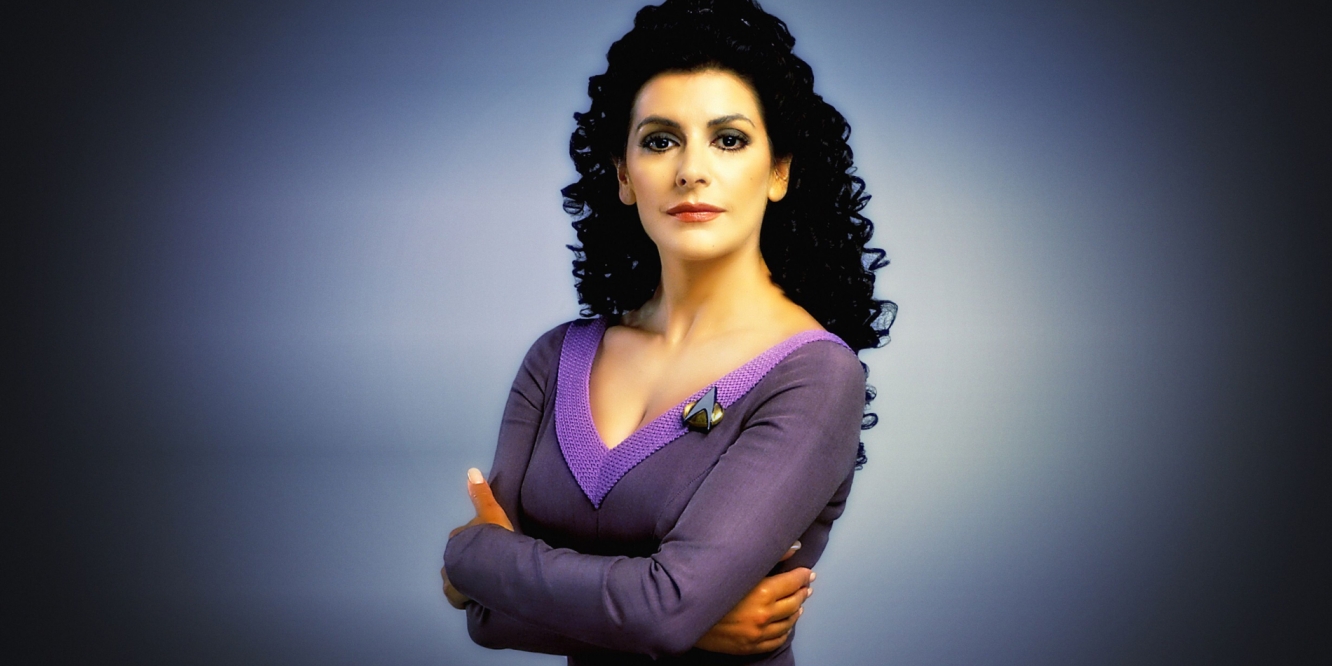 Scrolling through the Trek forums, fan pages, and blog posts dedicated to all things Star Trek, I was surprised to learn that many Star Trek fans have a low opinion of Deanna Troi (Marina Sirtis), one of my personal favorite characters from The Next Generation. Deanna Troi serves an interesting function on the bridge of the U.S.S. Enterprise as the ship’s counselor. Maybe it’s because of my own relatively new journey through therapy and mental health healing that I realized how important Deanna Troi is on the bridge of a galactic starship, where the dangers and traumas of space travel are plenty.

Deanna Troi is a main character who appears in Star Trek: The Next Generation and related Star Trek media. She is half-human, half-Betazoid, and possesses the ability to sense emotions. She is the daughter of Ambassador Lwaxana Troi (Majel Barrett) and deceased human Starfleet officer, Lt. Ian Andrew Troi.

In my opinion, the criticisms directed towards Deanna Troi completely miss the point and often tie into misogynistic views and feelings towards female characters. So much of Troi’s character ties into the ideas and themes of emotion and vulnerability. It makes sense that in a largely patriarchal society where being in touch with your emotions is seen as a weakness and not a strength or source of self-reflection, many would scoff at Troi and consider her worthless. I’m here to argue that Troi is one of the most important characters in The Next Generation.

The writers of Star Trek sometimes miss the point of the character themselves or fail to capitalize on what makes Troi so unique. She’s often saddled with lazy, sexist writing. Troi-centric episodes usually have the character being kidnapped or falling in love with toxic men in space. Sometimes she’s horrifically taken advantage of in episodes with rape allegory plots. Gene Roddenberry, the creator of Star Trek, originally envisioned Troi as having four breasts. Star Trek writer DC Fontana, who is responsible for writing some of the best episodes in the entire franchise, convinced him otherwise. She said:

“I honestly believe you will offend most women, and maybe a lot of men with this character. Besides, how are you going to arrange those four provocatively shaped breasts? Four in a row? They had better be small. Two banks of two? Do you know how much trouble women have with the normal number—keeping them out of the way of things, I mean. Four straight up and down? Don’t be silly.”

Marina Sirtis herself touched on the sexist and lazy writing that plagued the character. In The Fifty-Year Mission: The Next 25 Years: From The Next Generation to J. J. Abrams: The Complete, Uncensored, and Unauthorized Oral History of Star Trek), she said:

“Unfortunately, what happens if the girls have cleavage, they cannot have a brain because the two don’t go together. So when I got the gray space suit and got cleavage, all my gray matter departed. That was a shame because originally Troi was not supposed to be the chick on the show. Gene said she was intended to be the brains of the Enterprise, which you would never know from watching it. She was supposed to have equal intelligence of Spock. So when the cleavage came, all that left, and I became decorative, like a potted palm on the bridge.”

Sirtis, like many Deanna Troi fans, saw immense value in the character desite the less than desireable writing. “Every weekend at a convention, someone will say to me it was so nice to see a competent woman on a TV show who wasn’t “the bitch. Troi was strong and professional but took a pride in her appearance. It was kind of a first, to have a professional woman, who wasn’t “the bitch,” she said.

Despite the changes made to Deanna Troi’s personality, her finalized characteristics would still lead to years of study and critique. “She’s weak, she’s emotional, she’s useless, she likes chocolate” are some of the frequent criticisms slung towards the character.

I love reading the AV Club and during my early re-watches of the series, I’d look at Zach Handlen’s reviews of each episode I watched. I loved reading his critiques and perspective, and in some ways, it helped shaped me into the writer and reviewer I am today. But I found his criticisms of Deanna Troi unnecessary and frankly off-putting, and it wouldn’t be long before I discovered that many reviewers shared his opinions. This is not an attack on him at all, but an observation from a Troi fan like myself who saw so much potential in the character and hated the way people jabbed at her.

The episodes where Troi is allowed to shine and must save the Enterprise and her crew are the ones that stand out the most to me, like “Face of the Enemy” and “Night Terrors.” But even in episodes in which she plays a relatively minor role, Troi inspires the other characters around her to be their best selves, to be in touch with their own emotions so that they may better understand themselves, which in turn leads to a more efficient ship and a crew who cares deeply for one another. Those are all great things in my book.

In the Season 1 episode “The Arsenal of Freedom,” Captain Jean-Luc Picard (Patrick Stewart), Commander William Riker (Jonathan Frakes), Dr. Beverly Crusher (Gates McFadden), Lt. Tasha Yar (Denise Crosby), and Lt. Commander Data are trapped on a weapons manufacturing planet, leaving Geordi LaForge (LeVar Burton) in command of the Enterprise. Geordi is relatively young and at that point in the series, inexperienced in command positions. He’s rightfully nervous and must face the prospect of battle that will most likely lead to casualties among the crew. Troi visits Geordi and congratulates him on the strength and compassion he demonstrates as a leader. She tells him how proud she is of him and reminds him to allow the younger officers to draw inspiration from him.

In the Season 2 episode, Loud as a Whisper,” the Enterprise crew meets the famed and mysterious mediator and diplomat, Riva, who is deaf and communicates with a telepathic trio called the Chorus. During a mission, his Chorus is killed by a member of a faction who did not wish for peace. Riva is distraught and nearly refuses the mediate between the warring factions. Troi convinces Riva to take a disadvantage and turn it into an advantage, inspiring Riva to teach the factions to communicate with sign language. Riva’s idea to help the warring factions achieve peace through sign language is fascinating and beautiful. All he needed was some emotional support to look inside of himself, and he received support from Troi.

At the end of the episode, Picard pulls Troi aside and tells her, “You read me well enough to sense how I feel about you and what you do on this ship. But I just wanted to say the words ‘thank you, well done.” Picard values and trusts Troi, which is why she has a place on his bridge.

The Season 6 episode “Face of the Enemy,” is cited as a favorite among Troi fans. She’s surgically altered to look like the villainous Romulans and is sent on a highly dangerous mission behind enemy lines. It challenges Troi like never before, and forces her to summon all her inner strength to survive the mission.

Often Troi can sense deception that helps the crew the most. She may not always be able to name the negative emotion she is sensing from a particular adversary or party, but the ability to do so is a huge help to the Enterprise and her crew. Any advantage, no matter how small, is still an advantage. Troi’s intuition and her ability to sense emotions are necessary, albeit small, roles on the ship. She always followed her heart and encouraged the crew and her friends to do the same. Compassion is not a weakness. Empathy is not a weakness. Vulnerability is not a weakness. I think Bonnie Liston from the Mary Sue summarized Troi and our sentiments towards the character perfectly:

“I refused to let my love for Troi go. Women, people of color, and other marginalized fans of Star Trek often get used to watching the show through a kind of double vision—appreciating its attempts at depicting a better, bolder future while also painfully aware of the many sexist, racist, and homophobic hurdles it trips over along the way, appreciating where they tried instead of where they failed.”

It took a while for the writers to realize the potential of Deanna Troi. Later seasons allowed Troi to don the classic Trek uniform rather than the skin-tight jumpsuit, hold a phaser, and take command. The Next Generation movies brought a level of comedy to the character that wasn’t there before, allowing her to evolve and feel more real and dimensional, her horrific treatment by the writers of Star Trek: Nemesis, notwithstanding.

I will never apologize for loving Deanna Troi so much, and I’m happy that many fans are starting to come around and see her value. The way she’s presented isn’t always perfect and there are writing issues with her character, but these are human errors, human mistakes, who write what they know and write with a bias. I think as more women and marginalized people are allowed into the writing room and directing chair, attitudes will continue to shift. Now excuse me, I’m going to replicate a giant chocolate sundae in honor of my favorite Betazoid counselor.

Let me know your thoughts on Deanna Troi and Star Trek. For all things pop culture, check out my website. Stay nerdy!