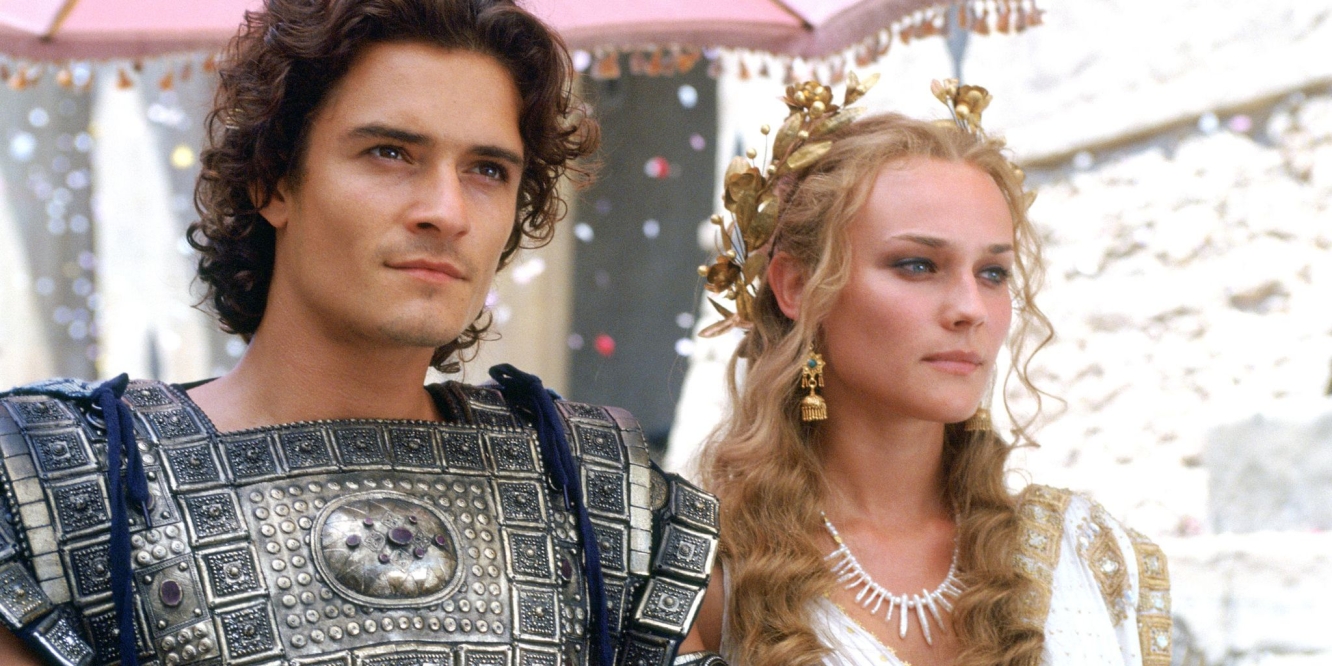 I recently watched the Director’s Cut of the 2004 epic war film, Troy. I love Greek mythology, and the story of Helen of Troy, the most beautiful woman in the world who men went to war for, has intrigued me since I was a child. Over the years I’ve seen a few scenes from the 2004 film directed by Wolfgang Peterson, but I never watched Troy, much less the Director’s Cut, in its entirety until yesterday.

Troy is a lavish and ambitious film stacked with an all-star cast including Eric Bana, Orlando Bloom, Diane Krueger, Rose Byrne, Sean Bean, Peter O’Toole, Saffron Burrows, Brian Cox, and Brad Pitt (boooooo). The film’s sets are magnificent, the action is breathtaking and visceral, most of the cast does phenomenal work with their roles, and the soundtrack is appropriately epic and somber given the film’s depressing story. Because yes—while Troy is mostly an exhilarating ride from start to finish—it tackles some interesting plot points about things like the legacy you leave behind, love and loss, faith, and the selfish nature of a few individuals that lead to the death and destruction of thousands of lives.

There were a few moments scattered throughout the film that made me sad, and I appreciated the way Troy—at least the Director’s Cut—developed the characters in a way that made me deeply invested in them despite their grisly fates. The film also makes it hard to know who to root for, because each side has its villains and heroes and most of the men fighting in this war have little to no choice in their own livelihoods. Even the opening scene of a dog searching the battlefield for his dead master speaks to the level of dread and tragedy in the film.

If Homer’s “The Iliad” was based on a factual story, Troy is the adaptation of that story. The film does away with all the mythical elements like gods and goddesses and presents all its characters as (mostly) believable people in a real tangible world. I know a lot of critics, including Roger Ebert, blasted the film for taking a more realistic approach to its story, but I don’t mind that it did, and I think those criticisms misunderstand what Troy was trying to say.

Let’s pretend for a minute that Troy is indeed a real, factual story. Once the warriors go home, the legend starts. As stories are passed around from the warrior to his children and from family to family, from generation to generation, the realism dies and the myth persists. Ordinary and lucky men become demigods through stories alone. A victory in battle is a gift from the gods, not from the strategic men planning the battle. This invisible war between reality, myth, and faith is brought up several times in the film itself, like with the frustrated Hector (Eric Bana), who points out that he and his men are fighting the war, not the gods, so it is the men’s advice that should be heeded.

This story also plays out with Achilles (Brad Pitt) and his acceptance of a short, spectacular life that will cement his name in the history books and legend, rather than a long peaceful, and unmemorable life. History remembers names—not accurately after a while, but that doesn’t matter to people like Achilles who thirst for fame and adventure. I’m not a fan of Brad Pitt. I typically don’t seek out his movies and I don’t think he’s that great of an actor. Achilles is front and center for a lot of the film, dealing with a weighty plot line that makes him question all his beliefs and his motivations. Pitt brings some charisma to Achilles, but his performance feels so muted and underwhelming, and it’s a shame because most of the other actors bring additional layers to their characters.

I was still invested in the story of Achilles and I appreciated the way the writing fleshed him out from a hardened warrior, but Pitt’s delivery just wasn’t there. Achilles is also presented as a regular, if very skilled warrior, not a mystical, almost unkillable force.

The film strips away the mythical elements but the core story is still the same. While negotiating for peace with the Greeks, Paris (Orlando Bloom) falls deeply in love with Queen Helen of Sparta (Diane Krueger), the wife of King Menelaus (Brendan Gleeson) who doesn’t love Helen, only the status that her marriage brings to him. They hatch a plan to escape the city and smuggle Helen on the boats returning home to Troy. It doesn’t take long for Menelaus to discover their treachery, and he turns to his brother, King Agamemnon, for help in raising all the Greek armies to get Helen back. Unlike Paris, who admittedly broke all the conventions and doomed an entire city in his pursuit of genuine love towards Helen, Menelaus isn’t motivated to set things right with his wife…he just wants to kill her for leaving him.

King Agamemnon isn’t interested in getting his brother’s wife back for heroic reasons either—Helen and Paris’ actions merely provide the excuse the power-hungry king has been searching for to go to war against Troy. Agamemnon and Menelaus also don’t care how many men will die for their vanity and pride, pitting them against famed warrior Achilles, who can barely disguise his contempt for the kings who think they own all. Despite his reservations and the warning from his mother about his fate, Achilles can’t turn down the temptation of fame and glory. He sets off with his own company of men, including his cousin Patroclus (Garrett Hedlund).

Along with the journey to war is one of the only truly honorable men, Odysseus (Sean Bean), one of the few kings Achilles trusts and respects. Unlike Agamemnon and Menelaus, who mostly remain behind in the tents during the battle scenes, Odysseus is on the front lines with his men, fighting alongside them and earning their respect.

In Troy, everyone prepares for war knowing the consequences of Paris’ actions. King Priam (Peter O’Toole) welcomes Helen with open arms. He soothes her fear that she brought war to Troy and tells her to trust in the gods, specifically the sun god Apollo. Priam’s unwavering devotion to Apollo is a source of contention for him and his oldest son Hector, who begs Priam to look at things realistically and put his faith in real, living men. Priam chooses the advice of his religious council, actions that would later spell doom for the city he loves with all his heart. Other major characters on the side of the Trojans include Briseis (Rose Byrne), a princess of Troy and a priestess of Apollo, and Andromache (Saffron Burrows), the loyal wife of Hector.

Once the Greeks arrive at the shores of Troy, the war officially begins. The battle scenes are breathtaking in their scope, with thousands of warriors filling the screen. I could almost feel every spear throw, every swing of the sword. In the film, CGI works hand-in-hand with practical effects, creating illusions of massive battles with seamless effort. 800 men trained as soldiers for the film in three weeks, and their hard work, as well as the hard work of the stunts coordinator and production team, pays off nicely. Each large battle feels more grandiose than the last before the film delivers a truly heart-wrenching finale in which Troy is violently sacked.

I appreciated the way Troy takes time to carefully develop its characters in between the scenes of intense action. Hector comes to terms with his likely impending demise and shows his wife a secret tunnel to escape. Achilles and Briseis fall in love despite their allegiances to Greece and Troy, respectively. Briseis’ arc in the film centers around her being an object for men to fight and lust over, but she defends herself as best she can and delivers one of the best scenes in the film’s conclusion, in which she makes Agamemnon regret ever messing with her. I don’t think the female characters in this film get enough credit for their roles. It’s easy to dismiss them as eye candy, but I found myself rooting for Briseis, Andromache, and Helen way more than I did for anyone else. I’ve always loved Helen in myth, so maybe I’m a little biased.

Helen struggles with the guilt of bringing the war to a city for love and attempts to hand herself over to Menelaus, though Hector stops her and reminds her that she is now a Princess of Troy. I thought Diane Krueger was an underrated presence in the film. Her portrayal of Helen conveys a ghost of a woman with no power, whose only joy and happiness come at the expense of thousands of lives. Diane Kruger was an unknown actor at the time she was cast to play Helen, and I think that adds to the mystery and allure surrounding the character. I still can’t fault Helen for her actions. Melenaus was truly a pig of a man who didn’t deserve his Spartan Queen. I think the blame lies mostly with the power-hungry men looking for any excuse to plunge the world into violence and chaos because everyone sees violence and chaos as means to achieve glory.

Troy is truly an exhilarating and tragic epic. It’s not a perfect movie and I can see where people would criticize it, but I enjoyed the movie and had a blast watching it. If you’re going to seek this film out and you haven’t seen it before, I suggest getting your hands on the Director’s Cut.

I loved Eric Bana’s portrayal of Hector, a good and honorable man who is tired of war and fighting. Nevertheless, he accepts the burden of command. His battle with the warlord Ajax was thrilling and terrifying. Ajax was a literal killing machine, slaughtering any man he encountered on the battlefield. Hector’s victory over him gave me some hope that he would be victorious against Achilles, but alas, the film follows the story and Hector dies after Achilles stabs him. Still, Hector put up one hell of a fight.

Troy is truly a visually stunning film. The sets were all carefully constructed, Troy felt like a real breathing city, and the costumes and armor were exquisitely crafted.

Yay, a movie where Sean Bean survives for once!

The fates of several of the characters were changed from their fates in Greek myth. Paris survives the sacking of Troy, and after killing Achilles with an arrow through his heel, Paris flees the city with Helen, Briseis, Andromache, and a handful of Trojan survivors. Menelaus and Agamemnon are both dead by the film’s conclusion, unlike in the original myth in which the brothers survive the war. I’m okay with the changes. Some of them were truly unexpected, and that’s okay for an adaptation.

What did you think of Troy? Let me know in the comments. For all things pop culture, check out my website. If you want to support the site, feel free to leave a donation below!

Or enter a custom amount