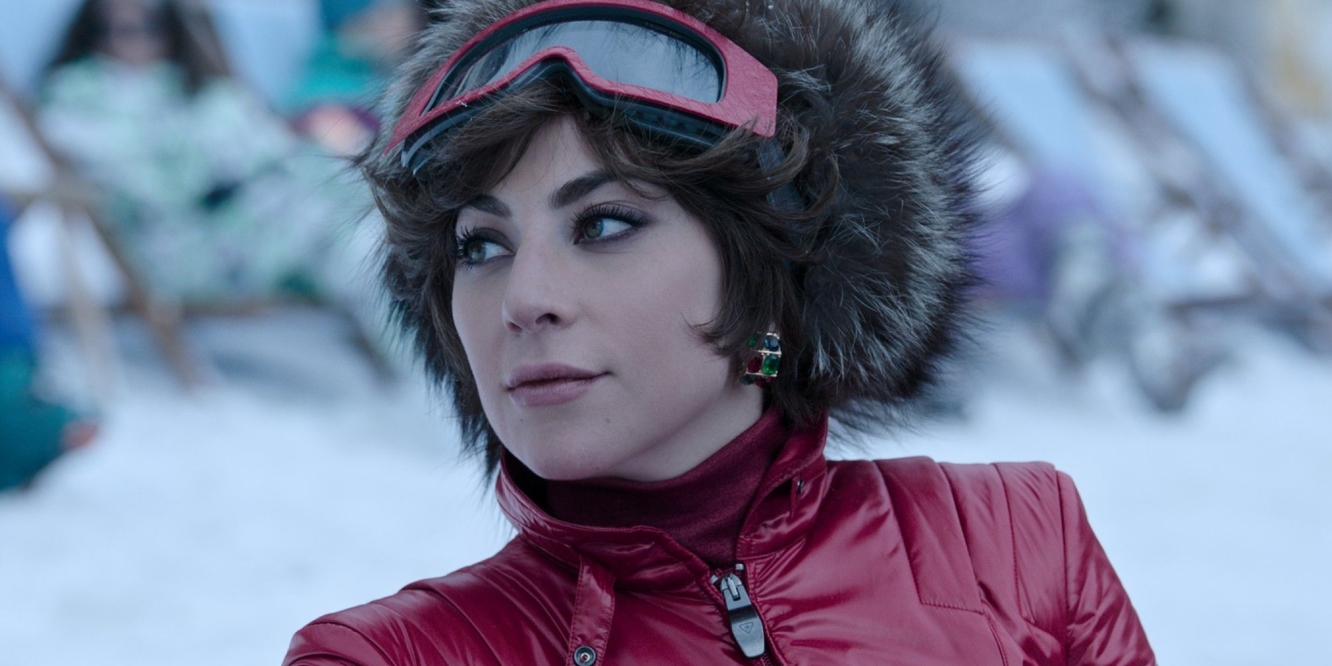 Of the pantheons of pop music, few are as audacious as Lady Gaga. Known as a provocative force of pop culture, she has slain her way from the top of the music scene into the bowels of Hollywood. The Lady’s portrayed many a murderess in her career, killing off men since her own music video for “Paparazzi,” now coming full circle in her new role as Patrizia Reggiani in the hotly anticipated House of Gucci.

Directed by Ridley Scott and written by Becky Johnston and Roberto Bentivegna, House of Gucci hits theatres on November 24th. The movie is partially based on the book of the same name by Sara Forden, itself based on true events surrounding the orchestrated murder of Maurizio Gucci. Gaga’s character, Patrizia Reggiani, was an outsider who married into the Gucci family through Maurizio (played by Adam Driver), who had inherited his father’s majority stake in the family business and eventually served as the head of the prestigious fashion house. Naturally, the fairytale glamour only lasts so long before drama ensnares the Gucci family, the newly christened Patrizia Gucci at the center of the web.

As all film versions of real-life events are, the nucleus of the true story will undoubtedly be wrapped up in several sexed-up layers of fiction. But of course, therein lies the fun. Oscar-buzz already surrounds the film, much of which is predicted for Lady Gaga herself. She was nominated for Best Actress for her last major role as Ally Maine in 2018’s A Star Is Born and won Best Original Song for the inescapable single “Shallow.” Unlike her turn in that film, Gucci will see Gaga standing solely as an actor, whereas with Star, Gaga portrayed a singer/songwriter, curating and writing the majority of the movie’s soundtrack.

Gaga is, of course, best known for being a singer/songwriter herself. Famous for her theatrics, killer vocals, and eccentric fashion sense, she first rose to prominence in 2009, when her debut singles “Just Dance” and “Poker Face” packed a one-two punch into the pop music stratosphere. Whether you loved it or hated it, the fame monster she unleashed into the world largely reshaped the musical zeitgeist of the time.

The 2000’s R&B-centric sound was ousted by a crashing parade of synths, electronic beats, and disco-stick-sized metaphors. Suddenly, singers dressed in jeans and T-shirts performed at awards shows in sky-high raptor heels with lobsters in their hair. It’s no coincidence that this makeover happened shortly after Gaga’s reign of pop culture dominance began. In many ways, she reintroduced the spectacle of 80’s pop performers such as Michael Jackson and Madonna (something which had been waning since the dawn of the millennium) as well as re-energizing the industry with a shot of the unpredictable. Thus, the landscape shifted to compete. By the time “Bad Romance” was blaring over the airwaves, the world had gone undeniably Gaga.

As her career has transformed, she’s morphed with it: from the space-age hair metal influences of 2011’s “Born This Way,” the surrealistic Greek mythos of 2013’s ARTPOP, the comparatively stripped-down Americana of 2016’s “Joanne,” her jazz collaborations with Tony Bennett, or her most recent foray back to the dance-floor with “Chromatica,” her identity in culture hasn’t exactly been… conventional.

Yet, she’s persevered through the ups and downs, ultimately dancing her way from the stage onto the big screen. Being an actress was a confessed dream of hers even before her career as a musician, but she was unconvinced she’d be able to make it as an actor. Before her rise to fame, Gaga attended N.Y.U. Tisch School Of The Arts, where she says her drama teachers weren’t the most supportive: “You’ll never be the heroine, the blonde, the star. Your hair’s too dark, you look too ethnic.”

“You’ll never be famous” is something Gaga heard a lot, which motivated her to prove her doubters wrong. She created Lady Gaga as a blonde, superhero version of herself, and her debut album, The Fame, became a self-fulfilling prophecy of sorts. Success was sweet, and that semblance of revenge was even sweeter. Criticism from drama teachers never stung as much as insults from an ex-boyfriend. “I had a boyfriend who told me I’d never succeeded, never be nominated for a Grammy, never have a hit and hoped I’d fail. I said to him someday, when we’re not together, you won’t be able to order a cup of coffee at the fucking deli without hearing or seeing me.”

After rocketing to fame, Gaga’s flair for the theatrical became apparent in her music videos. The final single off The Fame was “Paparazzi,” the aforementioned music video that became her first short film. In it, she took revenge on her fictional boyfriend by murdering him with poisoned tea. She then lit a man on fire in the video for “Bad Romance,” helped Beyoncé poison her man (and an entire diner full of people) in “Telephone,” murdered an office full of businessmen in “G.U.Y.” fired off some bullets from her heels in “John Wayne,” —need I go on?

But her killing streak doesn’t end there, as her first role in a movie came in Robert Rodriguez’s Machete Kills as La Chameleón. As the name suggests, Chameleón is an assassin who takes on various guises, swapping appearances and ethnicity and gender. Gaga was one of four actors to play the character in a movie just as (if not more) outlandish and colorful as her music videos. She’d go on to make a cameo appearance in another Rodriguez flick, Sin City: A Dame to Kill For, before landing her first major role in American Horror Story’s fifth season Hotel, starring as Elizabeth, The Countess. Once again, she was an on-screen murderer, slashing throats and drinking blood with reckless abandon.

While the baths of fake blood are fun, Hotel Gaga finally had the opportunity to show her range as an actor. Beyond the titular horror, flashbacks of the Countess showed a more vulnerable woman, eager for success and longing for love. She is then transformed into a monster, ruling the hotel with a cold severity. The trajectory doesn’t seem all that far from her own life, metaphorically speaking. And to be perfectly clear, I don’t mean any of that as a criticism. Rather the opposite. The intricacies of fame, the way society judges powerful women, and the pain associated with longing (either for fame or love) have been prominent themes throughout much of Gaga’s work; music, videos, or otherwise.

She sees “The Fame Monster” not as a label for herself, but rather that fame in itself is a monster—undeniably something she wanted, but something that also harms those who achieve it. Now not only are drama teachers or asshole ex-boyfriends judging her, but the entire world has their eyes on her. Everyone has an opinion; everyone wants to tear someone down. It’s a cycle.

In the same way that Gaga’s fame was revenge on the boy who said she’d never been famous, now millions know who she is. The judgment morphs from being “you’ll never be famous” to: “you shouldn’t be famous,” “you’re a sellout,” “you’re a whore,” “you’re not good enough, and you never will be.” Bombarded from every angle. It goes from one voice tearing you down to hundreds, thousands, millions. Thus, the sweet desire for revenge via success rears its head. Her murders of bad men have been fictional, but they represent a desire. If I can’t have love, I want power. Once I have power, I wish I had love. It’s a vicious cycle, and to survive, one must kill their own monsters, over and over again.

Is self-awareness of such phenomena a bad thing? I’m sure there’s a line that can be crossed. Arrogance is rarely a good look on anyone. When faced with fame, I imagine it would be hard not to be arrogant at times but also crushingly lonely and humbling at others. It’s an experience very few people have experienced. With such success, most people don’t want to hear if you’re sad. Because you have everything so many others won’t, you’re expected to shut up and be grateful. Thus, you take your experiences and the way you feel, channeling them back into your cart. The success and praise are regurgitated until people get tired of you, then the cycle begins anew.

The resiliency Gaga has shown in the wake of this has paid off. Her role as The Countess was largely praised, including a win for Best Actress at the 2016 Golden Globes. Another success. The next year, she went on to perform at the Super Bowl Halftime Show. Another success. Finally, it was time for her big-screen debut in a leading role in Bradley Cooper’s version of A Star Is Born. Another whopping success. “I said to him someday, when we’re not together, you won’t be able to order a cup of coffee at the fucking deli without hearing or seeing me.”

A Star Is Born took many people by surprise. As Ally, the glitz and glamour of Lady Gaga was stripped away. For the most part, she was presented as remarkably plain. Ally was the girl who loved to sing but never made it big.

“You’ll never be the heroine, the blonde, the star.”

Until being discovered by chance by waning rock star Jackson Maine (played by Bradley Cooper). Stunned by her talent, he sweeps her off her feet and presents a song she wrote (that previously mentioned little ditty called “Shallow”) to the world. Ally rockets to fame. Everything changes.

Of course, the hurricane of opinions comes crashing in. Many see the film as Gaga’s life story, not recognizing the character as Ally as being her own person. That Gaga’s story is quite different. Of course, there is a similarity. Gaga can relate to Ally’s situation more than just about anyone else can. But underneath the showbusiness, we get to see Ally as a girl. She wants to be heard. She’s devastated by the loss, sometimes gets carried away by her own hype. She’s very human. And very raw. And audiences were stunned. Ironically, many seemed to think of Gaga as a character. Through watching an actual character, she was portraying, they seemed to remember that Gaga is, at the end of the day, another person. A person simply on a very large scale.

Even more ironic is that despite everything, she’s now come full circle. With her starring role in House of Gucci, Gaga is the dark-haired star she was told she could never be. A character, of course, but a role she was told she’d be relegated to play on the sidelines.

This time, House of Gucci is removed from the music business, though still “Gaga”-adjacent. High fashion, glamour, and even murder are still abound, but in a vastly different incarnation than we’ve ever seen from her before. The flood of opinions will undoubtedly come in; hell, many still are even before the film’s release. There will undoubtedly be criticism, and praise, maybe even another Oscar nomination. And just like the salacious story the movie is based on, life will go on, and the opinions will fade. But the art made will live on, for all time to come.

Are wealth, style, even power really worth killing for? Lady Gaga probably has an answer for that question more than most. But unlike Patrizia, her murders remain fictional. Whether or not she slays the hearts of the audience remains to be seen. But as a certain ex-boyfriend can attest, we’ll still see her face whenever we go to the fucking deli. All’s you need is a pair of shotgun heels to take down any monster standing in your way. For that, we close our eyes and pray.