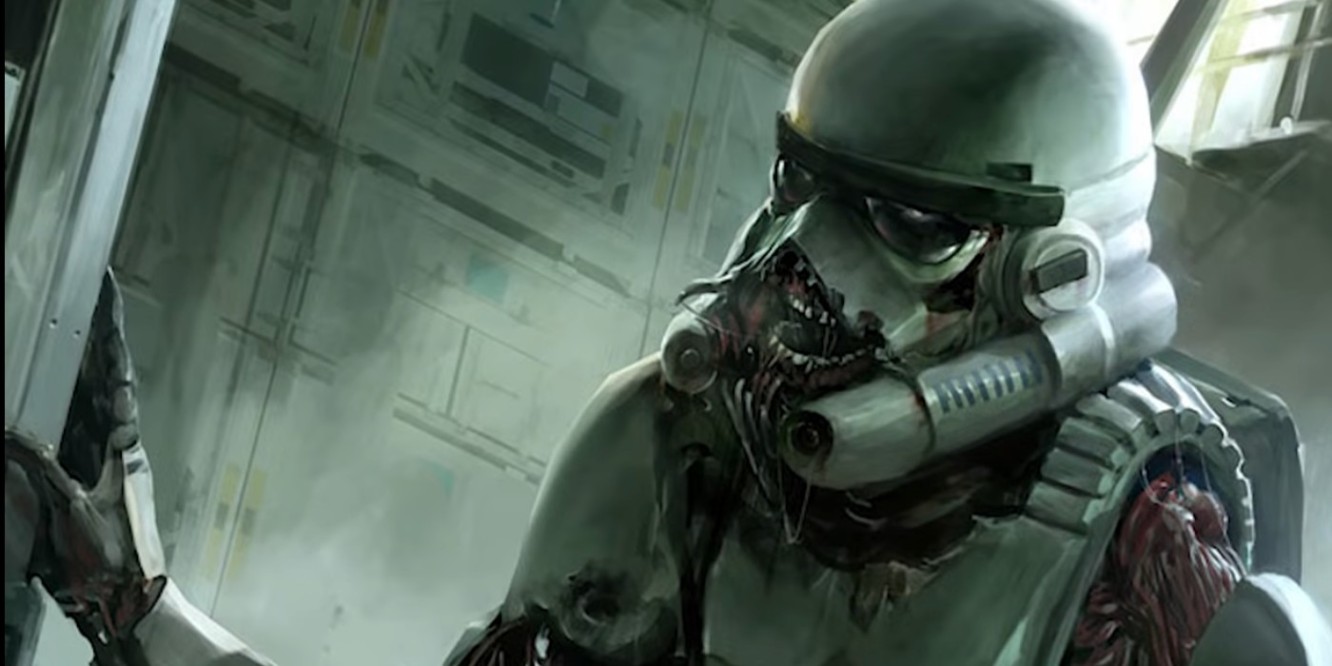 Note: I will be discussing minor spoilers in my book review, so consider this your official spoiler warning.

Han grunted as the lift reached the infirmary level and stopped. Zahara remembered the corridor vividly, how it had been littered with bloated corpses of guards and stormtroopers who had died waiting to get into the medbay–dozens of them, sometimes stuck to one another with the fluid they’d been heaving up when they finally collapsed. The smell would have intensified too, she knew. She expected Han would say something, maybe cover his mouth and stand there a moment before taking it all in, the way she had when she’d first laid eyes on it.
The turbolift stopped and the doors slid open on the hallway. Zahara braced herself for the shock–and looking out, she felt a different kind of shock go through her, quick and jolting, making her legs feel heavy and weak at the same time.
All the bodies were gone.
-Death Troopers, page 123-124.

When the Imperial prison barge the Purge–home to some of the galaxy’s most ruthless killers, thieves, criminal masterminds, and poor hapless Rebels–breaks down near the Unknown Regions of space, all hope for the crew seems lost until their scanners pick up a legendary Star Destroyer, a behemoth of horror and misery, drifting aimlessly through space near their location. The Star Destroyer seems abandoned, but when a boarding party from the Purge, led by the exhausted and somewhat bloodthirsty Jareth Sartoris, is sent to scavenge for parts, they encounter a horrific disease they accidentally bring back to the Purge. Within hours, almost all 500 prisoners and crew of the lonely and insidious prison barge die a horrific and agonizing death, leaving only a small handful of survivors desperately attempting to escape the Purge.

RELATED: Zombie Physiology, According to The Walking Dead

Unfortunately for the survivors, including two teenage boys Trig and Kale Longo, chief medical officer Zahara Cody, and our two most favorite scoundrels in the galaxy, Han Solo and Chewbacca, the mass death around them is only the beginning. The dead are rising, and their unquenchable hunger, their soulless rage, their craving for flesh relentlessly drives them after the survivors, creating a tense race against time as those left spared by the horrific disease plot their escape.

Death Troopers, written by Joe Schreiber (Red Harvest, Maul: Lockdown), is a thrilling and horrifying Star Wars adventure published in 2009 under the umbrella of Legends–Star Wars material that exists outside of Disney’s established canon. At only 271 pages, the book makes for a quick, edge-of-your-seat (or, in this case, under the blankets) read, expertly combining elements from the horror genre with the Star Wars galaxy.

Star Destroyers are imposing vessels by themselves. Shreiber adds rage-fueled and starving hordes of undead stormtroopers, Imperial agents, Rebels, and aliens (including a family of zombified Wookies), to the mix, which creates a terrifying atmosphere reminiscent of Alien and Dead Space. There’s plenty here for both horror fans, and Star Wars fans to enjoy, from cameos of familiar alien races, name-drops of Darth Vader, and the addition of Han Solo and Chewbacca, who surprisingly feel right at home in this blood-soaked adventure. Horror fans will appreciate the buckets of blood and gore Death Troopers has to offer–and trust me, there’s plenty of gore. Non-horror or squeamish Star Wars fans may feel put off by the descriptions of heads blowing up, flesh being ripped from the body, and severed limbs being wielded around by flesh-starved zombies.

Death Troopers moves at a surprisingly fast pace, but its small cast of characters ensures the reader will never get lost in what’s happening on the page and will feel the emotional weight when a character meets their grisly demise. As a massive horror fan, I had an absolute blast with this book. I thought it was well-written, and some sequences were truly horrifying. I wanted Death Troopers to explore some plot points further, like why certain characters were immune from the disease, but considering that’s just a staple of zombie fiction, it wasn’t something I was too bothered with. Overall, I enjoyed the story and the characters.

One character who particularly stood out to me was Dr. Zahara Cody, the chief medical officer on board the Purge. She’s a wealthy heiress who falls in love with an older surgeon and accompanies him across the galaxy, learning from him and acquiring various other medical skills. Determined to escape the grasp of her prim family, she enlists as a medical officer on board the Purge and soon becomes a firm advocate for the prisoners, even resigning from her post just before the barge breaks down following the unjust murder of one of the Purge‘s unlucky occupants.

The passages detailing Zahara’s attempts to find a cure and cope with the mass death around her rang familiarly true to current events. I also enjoyed the brothers Trig and Kale, who are trapped on the Purge through no fault of their own and band together to survive the undead horrors awaiting them.

All in all, Death Troopers makes for a fast-paced and blood-soaked adventure, and I highly recommend this book for any fans who may be curious how Star Wars deals with the horror genre. The zombies worked well in the period of the dark reign of the Empire, and the appearance of Han Solo and Chewbacca will delight any Star Wars fan looking for those familiar faces.

I thought the warden of the Purge was a woman since I first read Death Troopers as a kid, but then I remembered that the female warden appears in Schrieber’s 2014 Legends book Maul: Lockdown, a fantastic book that also takes place on the barge ship, the Purge. Things don’t go well for the wardens of the Purge.

I loved that Death Troopers presented a few passages from Chewbacca’s perspective. Like the rest of the book, they were tense and horrifying, but Schreiber captures the big Wookie’s warm heart beautifully.

Speaking of Chewbacca, check out these passages from Chapter 20, “Lifeday,” which details our favorite Wookie fighting off the disease of the dead:

The first thing Chewbacca felt was the pain of the young ones. It came at him from everywhere at once, a threnody of wounded voices, assailing him from all sides. He didn’t know what it meant except that something bad had happened here aboard the barge, and now it was happening to him too.
His skull felt like it was filling with fluid, blocking out his sense of smell. But his hearing was keener than ever. Voices were shrieking at him, no longer pleading but accusing him of unspeakable atrocities, and when he looked down at his hands, he saw that they were dripping with blood.
And then the sickness was in him.
And the sickness wanted to eat.
He snarled louder, lashed out, wanting to make it go away, but it was too deep already, burrowing through his memory, bringing back details he hadn’t remembered in nearly 200 years. He heard old Lifeday songs from Kashyyyk, saw faces–old Attichitcuk, Kallabow, his beloved Malla–except their faces were changing now, melting and stretching, mouths hooking into strange, contemptuous grins.
They saw how the sickness could not be sated, how it wanted to keep on killing and eating until there was nothing left but blood that might be lapped up from the cold durasteel floors. They said, These are the true songs of lifeday. these songs are eat and kill, eat and kill.
pages 116-118

Have you read Star Wars: Death Troopers? Let me know what you thought of the book in the comments. Check out my website for all things horror and Halloween, and stay nerdy!