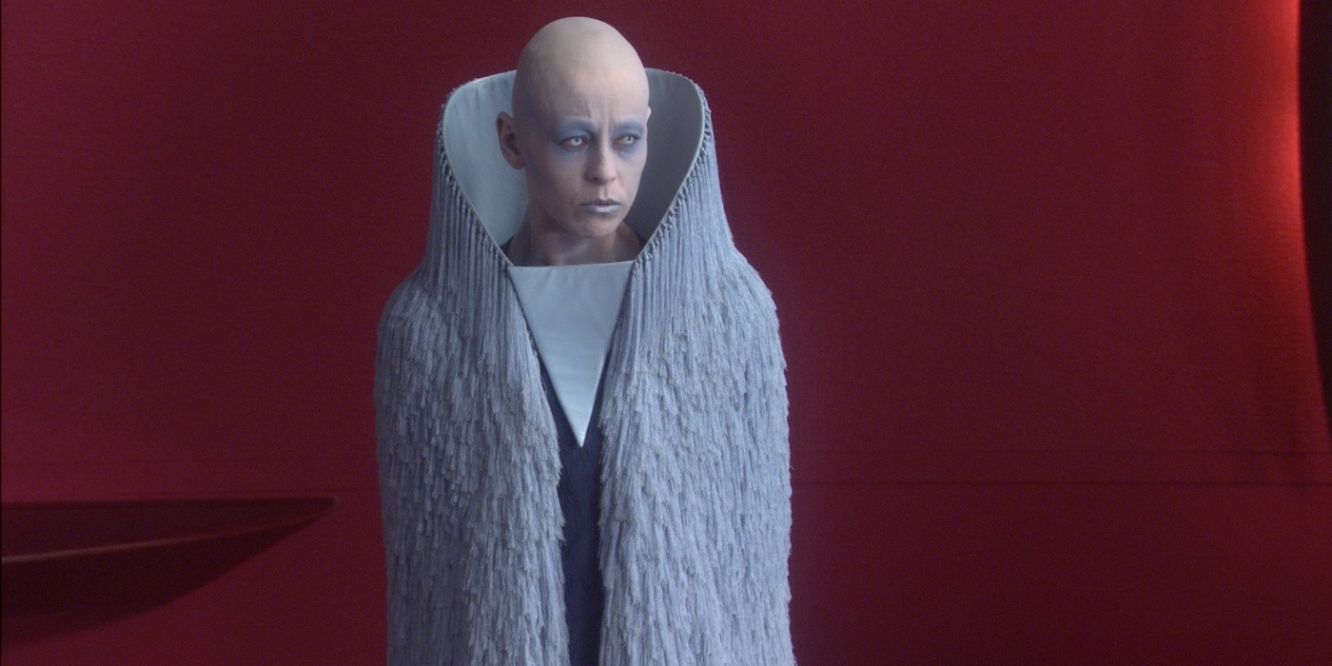 Sly Moore makes for an imposing but memorable character. Tall, bald, and severe, this graceful and mysterious Umbaran serves as Chancellor Palpatine’s closest ally and confidant. Nothing escapes her piercing gaze, and her past is just as mysterious as the blue skinned Umbaran herself. Welcome to “Star Wars Needs More” series where I cover obscure or forgotten (or simply deserving of more focus and material) Star Wars characters, explore their backgrounds in both Disney’s canon and the Legends material that came before, and make a case for why we should see more of the character in upcoming movies, television series, novels, comic books and video games. Without further ado, let’s dive into Sly Moore’s role in the Star Wars universe and what we’d like to see of her in the future.

Sly Moore made her debut in Star Wars Episode II: Attack of the Clones in which she was portrayed by Australian disc jockey and actress Sandi Finlay. She served as the senior administrative aide to Chancellor Palpatine, and was Force Adept with the ability to manipulate the minds of others. She was born on the planet Umbara, and her people–also known as the Shadow People–were characterized by their blue skin and colorless eyes. Their entire society was built around a caste system of blackmail and subterfuge, and while their numbers were few in the Galactic Republic, they, like Sly Moore, were at the center of politics, silently scheming their way to power and influence.

Rumor and mystery surround Sly Moore, but unlike the rest of the galaxy, she was aware of Palpatine’s dual role as Lord of the Sith and Supreme Chancellor of the Galactic Republic. She stood by him during his declarations of power and the transition of the Republic into the Galactic Empire, but after her brief scenes in Attack of the Clones and Revenge of the Sith, she’s never seen in cannon material again. In order to learn more about this imposing figure, we have to look at her story and background in Legends, which is material existing outside of Disney’s established canon following their acquisition of Lucasfilms in 2014.

Just like in canon, Sly Moore hails from the shadowy and mysterious planet of Umbara, located in the Ghost Nebula, and her people are known for their political cunning and ambition. At birth, Sly Moore was believed to be Force sensitive, but before the Jedi could bring her into their ranks, she was kidnapped by Darth Maul on the orders of his master, Darth Sidious. She was imprisoned in a tomb on a giant asteroid field in the Outer Rim called Cron Drift, where she was experimented on and subjected to mental and physical assaults by Sith spirits–however, the Umbaran’s strength of will kept her from going completely insane. Impressed by her ability and survival of the rigorous trails, Darth Sidious rescued her from the tomb and educated her in the art of politics, forming a close bond with her in the process. The trust between the two was so strong that Sidious revealed his identity as a Sith Lord and his own power in the Force. Over time, Sidious let Sly Moore in on the Grand Plan to topple the Jedi Order and bring “peace” to the entire galaxy. Vowing eternal loyalty to the Sith Lord, Sly Moore became his most trusted advisor and worked with him from his days as a Senator of Naboo to his Chancellorship of the Galactic Republic. It was rumored that she blackmailed Sei Taria, the aide to the former Chancellor Valarum, for the position of senior administrator to prevent Taria from taking the role for herself following Queen Amidala’s call of a Vote of No Confidence in Valarum’s Chancellorship.

With the outbreak of the Clone Wars, Sly Moore stood dutifully by her master’s side, and the Chancellor even had the Umbaran disguise herself as his Dark Lord alter ego in order to trick his underlings and force anyone who was disloyal into obedience. Both Sly Moore and Chancellor Palpatine came under scrutiny of the Jedi Order as the Clone Wars raged on, as the Jedi Council believed a Sith Lord had infiltrated the highest offices of the Galactic Republic. However, before the Jedi could fully act on their suspicions, Palaptine slaughtered the Masters who confronted him, and with his new apprentice Darth Vader, he proceeded to eradicate the entire order. From the ashes of the Jedi Order and the Galactic Republic the Empire rose, and while attending the Declaration of a New Order, Sly Moore bore witness to her master finally achieving the Grand Plan and becoming Emperor.

Queen of the Empire

Sly Moore’s position as one of the first members of the Imperial Ruling Council and her close relationship with the Emperor lead to the unofficial title of Queen of the Empire and she became a popular and glamorized figure among the galaxy’s tabloids, even after her disappearance from public life. Shortly after the rise of the Empire, Darth Sideous transferred Sly Moore to the Deep Core planet of Byss–known for it’s powerful Dark Side energies–where she oversaw the culling and training of captured Jedi Padawans. She delighted in corrupting the young Jedi and turning them into acolytes of the Dark Side. Sly Moore’s rivals, like the jealous Grand Inquisitor Malorum, despised her power and influence within the Empire but dared not oppose her, for fear of incurring the wrath of the Emperor himself.

While on Byss, Sly Moore supervised a pair of Shi’do scientists as they conducted experiments on the spontaneous generation of life. It was through this process that she came into possession of Force-sensitive DNA–possibly from Sideous himself–and began studying the techniques perfected by Sideous’ master Darth Plagueis in order to influence the midi-clorians of the DNA to create a zygote–or fertiziled ovum–within a female humanoid. She abruptly vanished from the Imperial court after she became pregnant through this process, and it was believed she experimented on and impregnated herself with Sideous’ DNA.  She retired to the Ghost Nebula where she died giving birth the three-eyed mutant Triclops, who was regarded as the true son of Sideous.

With the The Rise of Skywalker‘s revelation that Rey is the granddaughter of Palpatine, it raises the question of who her grandmother could be. Was it Sly Moore? Of course this seems to be stretch, especially considering that Rey doesn’t seem to possess any Umbaran blood–at least at first glance. Could Sly Moore have given birth to a human child who later sired Rey? From the brief shot we got of Rey’s father in final film in the Skywalker saga, he appeared to be fully human (remember, the Umbarans are known for their blue skin and gaunt features) but what–if any–role did Sly Moore play in the progression of the Palpatine’s bloodline?

There’s so much mystery surrounding Sly Moore in Disney’s cannon, and it would be great to see an in-depth exploration of her and the Umbraran people. Given her Force abilities and relationship with Palpatine, perhaps we could see a story about Sly Moore’s role in his rise to power. Star Wars features several enthralling female villains, but with unanswered questions about her past and her disappearance from any current cannon material, the storytelling potential of Sly Moore’s life and rise to power is intriguing.

What do you think of the character? Would you like to see more of her in the future? Let me know your thoughts in the comments and who I should cover next, and as always, stay nerdy!