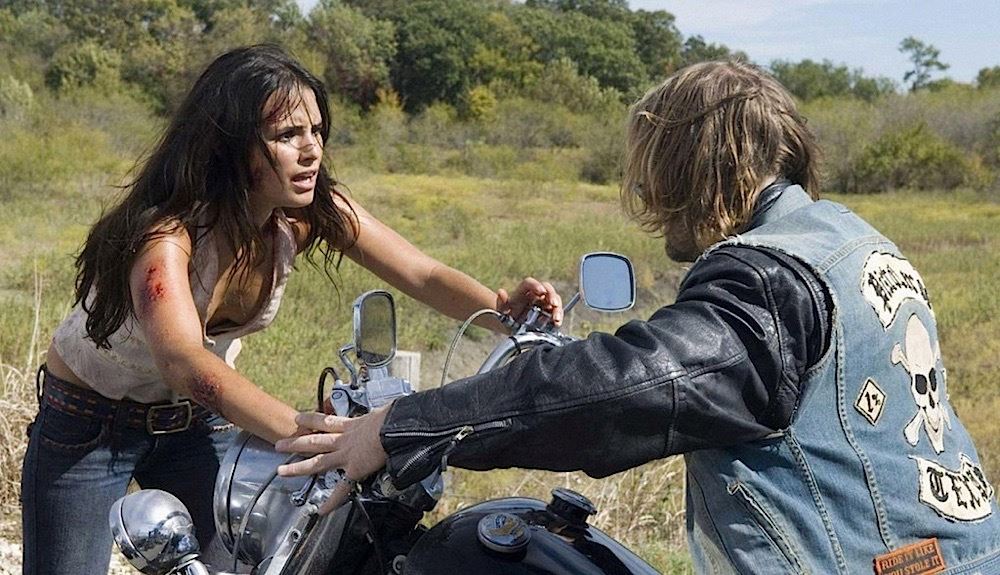 I previously covered Six Women of Horror Who Should’ve Been Final Girls, and after receiving some feedback and ideas (and since horror is awash with victims who were so close to surviving their respective films that they were practically Final Girls already) I put together another list of women who should’ve claimed the mantle of Final Girl, the character  (or characters) who triumph over the killer and live to tell the tale. Unfortunately for the ladies on this list, the filmmakers were either trying to shock audiences with who ended up on the kill count or were determined from the start that no character made it to the end credits. No matter how likable they were or the lengths they went to try and survive, the ladies on this list sadly didn’t make the cut. Without further ado, here are the women who ended up as victims but who should have emerged victorious to claim the title of Final Girl.

Maddy (Diana Barrows) seemed to fit the bill for the typical Final Girl. She was studious, she lacked confidence in herself, and she was kind to main character Tina. With her messy hair, big glasses, and eagerness to fit in, Maddy seemed to be the one to escape the murderous clutches of Jason Voorhees and make it to the film’s end credits–but sadly, Maddy ended up as just another victim–the 60th in fact–of the hulking hockey mask-wearing killer. Maddy comes to Camp Crystal Lake with with her friends for a weekend of partying and to celebrate the birthday of one of the teens, Michael Rogers. Maddy wanted to impress the boys at the party, but her friend Robin’s insulting remarks on how to “touch up” left the girl upset and eventually, alone, which as we know, is a death sentence at Camp Crystal Lake.

After putting on some make-up and embodying the nerdy-girl-becomes-hot trope, Maddy searches for her love interest Dave only to discover the butchered body of one of Jason’s victims. Maddy attempts to escape and hide, but Jason bursts out the wall behind her and swings his sickle into her neck, killing her.

Maddy, this is one weekend birthday trip you should’ve sat out.

The Texas Chainsaw Massacre franchise is infamous for putting its Final Girls through literal hell, and Chrissie (Jordana Brewster) was no exception. However, unlike Final Girl Sally Hardesty, she meets her tragic end at on the whirling blades of Leatherface’s chainsaw with only a few minutes left to spare in the film.  Texas Chainsaw Massacre: The Beginning serves as one of the many prequals of the franchise’s countless timelines and retellings, and follows two brothers on a road-trip with their girlfriends before deporting to Vietnam. Unfortunately for the young adults, they find themselves at the mercy of the brutal and cannibalistic Hewitt clan. After they encounter a group of bikers which leads to a car crash, Chrissie is thrown from the vehicle and witnesses the torture Hoyt Hewitt (posing as a sheriff) inflicts on her friends. It’s her loyalty to her friends and deep love for her boyfriend Eric that prompts Chrissie to form a truce with one of the bikers and attempt a rescue, but in the process the biker is killed and Chrissie witnesses Leatherface skin Eric alive and take the man’s face as his new mask. Chrissie nearly escapes from the house but hears her friend Baily crying, and returns to rescue her, only to end up as the uninvited guest to the Hewitt’s horrifying dinner party.

After several chase scenes, Chrissie attempts to escape in a car, but Leatherface springs up from the back seat and activates his chainsaw straight through her chest. Ouch.

Destiny’s Child R&B star Kelly Rowland made a splash in the horror genre with a role in the crossover film, Freddy vs. Jason as Kia Waterson. Kia was funny and bold, and rather than screaming and hiding, she fought back with a fury, even going toe to toe with Jason Voorhees. Kia was close friends with main Final Girl Lori Campbell, which never bodes well for the survival of any character. But Kia proved she was more than up to the task and would do anything to survive, even if it meant performing CPR on Jason to ensure their survival against Freddy. Yuck. Kia even distracts Freddy, emasculating him while Lori and her boyfriend prepare a trap for the two killers pursuing them. This spells her doom when Jason sneaks up behind her during her dressing down of Freddy and slashes her hard enough with his machete to send her body flying against a tree.

I was not a fan of Kia’s “f**got” line directed at Freddy, especially given that the line was adlibbed and kept in the film’s final cut, but I have to give Kia credit for very nearly surviving the showdown between the two horror icons and for doing mouth-to-mouth with Jason Voorhees. Again, yuck.

The Hitcher was a thrilling horror action film about a homicidal lunatic terrorizing drivers in the West Texas desert and was actually pretty enjoyable until the it fridges the only woman in the movie in a pretty gruesome fashion. Nash’s very disturbing death still sits with me, and even though the end result occurred offscreen, the idea of being tied between two trucks and literally being torn apart while the cops stand around watching helplessly is absolutely horrifying. The scene was was filled to the brim with suspense, and Rutger Hauer exuded menace as the titular hitcher terrorizing Jim Halsey, a young man just trying to deliver a car safely from Chicago to San Diego. Jennifer Jason Leigh plays Nash, a kindly and charming waitress who attempts to help Jim, only to end up tied between two trucks as a result, with hitcher Ryder’s foot on the gas. Nash was given several small but key scenes that really drove home how real her character felt. She had some tender moments with Jim and she even finds a private moment to call her father and tell him that she’s okay.

The Hitcher was set up as a film to break the rules of the slasher genre, and with that in mind, it’s not surprising that Nash didn’t survive the movie. It doesn’t diminish the fact that her death felt needless and overly bleak. Interestingly, the remake gender swapped the characters in the scene and was more graphic in that it depicted the moment of death. Still, viewers rooted for Nash’s survival and her death consistently ranks near the top of numerous horror movie death scenes.

Hostel is a difficult film to watch for its gratuitously violent torture scenes, and Kana’s torture at the hands of the American Client is perhaps the pinnacle of that difficulty. The young woman (Jennifer Lim) and her friend Yuki are staying at the same hostel as the main characters Paxton, Josh and Óli when Yuki goes missing. Kana herself is captured and wakes up in a dungeon-like room where the American Client burns her eye with a blowtorch. Paxton, the only survivor of the group, rescues Kana and the two manage their escape in a car, running over some of their tormentors in the process. The two make it to the train station but Kana sees a reflection of her disfigured face and kills herself by leaping into the path of an oncoming train.

Considering the awful and horrific torture she endured, I couldn’t help but root for Kana to make it to the end of the film, especially given her and Paxton’s escape. No one has an easy time watching eye mutilation scenes, and Kana’s was easily one of the most horrific. She was so close to surviving the film, but the filmmakers had other plans for Kana and sadly her making it to the end credits in mostly one piece was not in the cards.

Christine Brown- Drag Me To Hell

Drag Me To Hell follows a woman who is cursed to suffer horrific hallucinations for three days before being dragged to an eternity of suffering. Christine fought so hard to survive, even killing her beloved kitten in the process, but her refusal to approve Mrs. Ganush’s request for a third extension on her mortgage sealed her fate. Christine is ambitious and self-motivated, but she finds herself stuck between a rock and a hard place when her boss promises her a promotion provided she could make tough calls. She feels guilty for her decision to deny Mrs. Ganush’s request but nevertheless is driven by the greed of a promotion, and she suffers for that decision. At it’s heart, Drag Me to Hell is a movie exploring the themes of selfishness and what someone will sacrifice to ensure their survival, and Christine proves she’s willing to do whatever it takes to make it out alive. For 72 hours, she tries to stay one step ahead of the demon Lamia.

Christine’s fate is the topic of many a polarizing conversation on whether she deserved to be dragged to hell (I mean, she did kill a really cute kitten). Wicked Horror’s Nat Brehmer wrote Christine “deserved everything she got” for refusing to extend Mrs. Ganush’s mortgage—but let’s not forget the mortgage had already been extended. Twice. Many have pointed out that Christine’s apology to Mrs. Ganush was insincere, but we are talking about a woman who cursed her to suffer in eternal damnation.

What do you think about the women on this list? Who did you want to see survive? Let me know what you think and who should be on the next list in the comments. As always, stay nerdy!