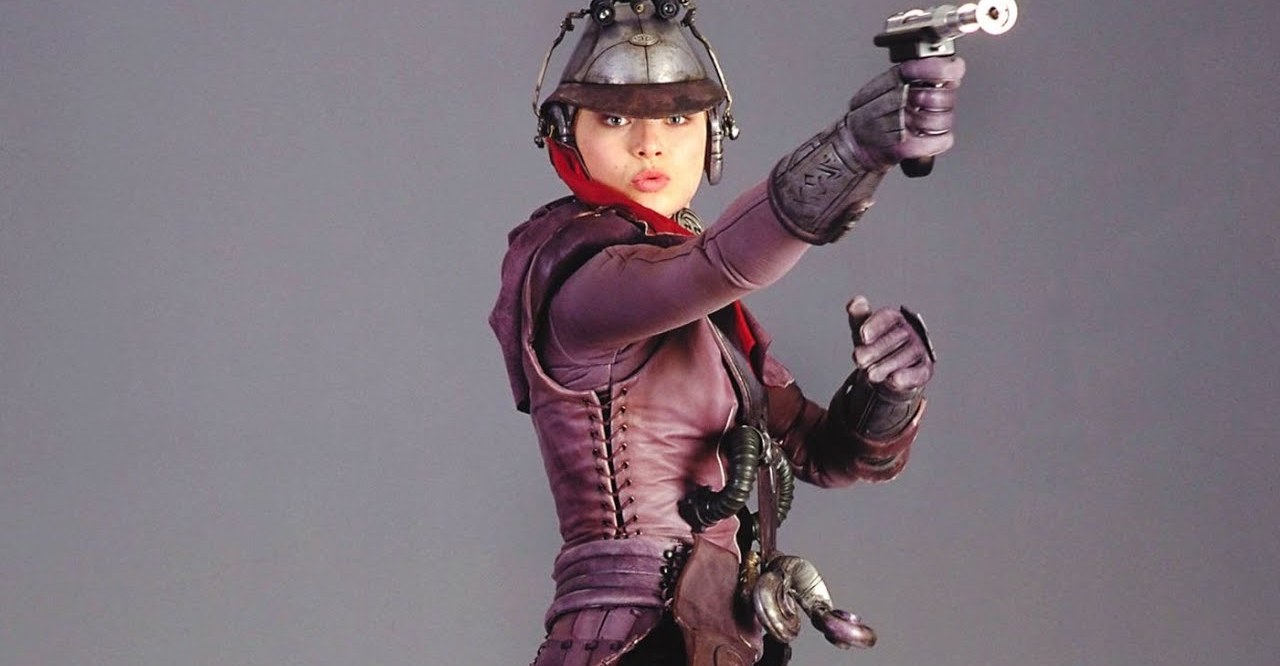 The Femme Fatale of Star Wars.

From her iconic purple armor to her dangerous shapeshifting abilities, Zam Wesell makes for a formidable foe, and though her role in Star Wars: Attack of the Clones was brief, it was memorable and left fans wanting more from the Clawdite bounty hunter. As popular and supporting characters see their new canonical backgrounds expanded and reevaluated in the wake of Disney’s acquisition of Star Wars and with the recent and upcoming television series, novels, video games and comics, I can’t help but think a story focusing on Zam’s adventures in Coruscant’s seedy underbelly or in the lawless Outer Rim is long overdue. Given the success of The Mandalorian and the teased return of a live action Boba Fett, the timing couldn’t be more perfect to revisit this kickass female bounty hunter. I watched Attack of Clones as a kid right after watching A New Hope and fell deeply in love with movie. I was always drawn to Zam; I loved her badass purple armor and it was cool to see a female villain in Star Wars. From her botched but deadly assassination attempts to the spectacular chase scene in the space lanes above Coruscant, Zam proved herself a worthy (albeit temporary) adversary to the Jedi.

Zam’s slowly faded to the background of other more popular Star Wars characters but she’s tough as nails and her natural ability to shape-shift opens up the door to all kinds of storytelling possibilities. With that in mind, welcome to “Star Wars Needs…” series where I cover obscure, forgotten or underrated Star Wars characters we should see more of. I use both Canon and Legends for the character profiles, and I’ll clearly label if the background stories, plot details and behind-the-scenes facts are cannon to Disney’s current material or are from the original Expand Universe. For new fans of Star Wars—and even for some veterans—it can be confusing what material falls under which banner. To kick things off, let’s take a look at our first subject.

Zam made her live action debut in Attack of Clones, when she’s contracted to kill Senator Padmé Amidala by Jango Fett, her ally and occasional partner. Her initial attack on Amidala and her entourage using an explosive device on their ship’s landing platform fails, although it does lead to the deaths of handmaidens Cordé and Versé. Zam then attempts to eliminate the Senator using a small beetle-like creature known as a kouhun, though her droid is caught in the act by none other than Anakin Skywalker and Obi-Wan Kenobi. What follows is a thrilling chase sequence through the skies of Coruscant, which ends with Zam attempting to hide in the Outlander Club. The Jedi followed her into the loud and overcrowded public space and Zam attempted to shoot Kenobi but the Jedi Knight activated his lightsaber and cut off her arm. Along with his Padawan, Kenobi escorted Zam into the alleyway behind the club, but before he can interrogate her on who hired the Clawdite to assassinate Amidala, she’s shot and killed by Jango Fett.

Disney canon established that Zam was born on the planet Zolan and she was trained by an ancient order of warrior-knights and changelings known as the Mabari. At some point, Zam–desiring wealth and profits– left to travel the galaxy and make a name for herself as a bounty hunter. She eventually met and formed a partnership with Fett, but that’s all the details we have of her past. Legends offers a deeper exploration of the character, and she’s been featured in a number of works, including novels, comic books, and video games.

In Legends (which is material existing outside of Disney’s established canon starting in 2014) Zam still hails from Zolan and is a member of the Clawdite species, who’d developed their shapeshifting abilities over the centuries due to genetic engineering experiment gone wrong. Just like in cannon, from a young age, Zam trained with the warrior clan, the Mabari, a religious sect of warrior-knights. However, she desired profits and was overly aggressive, shying away from the Mabari’s religous ways. Labeled a heretic by her people, Zam was shunned from the order and forced to flee Zolan. Disguising herself as a human businesswoman, she began working in corporate security on the planet Denon. During her time on the planet, Zam refined her skills and created her equipment, including her purple armor and blaster, and garnered a reputation as a skilled warrior. Her armor was formfitting but allowed her to shapeshift into anything she wanted, and protected her from grenades and other energy based explosives. She used both a KYD-21 blaster pistol and a KiSteer 1284 projectile rifle.

She eventually turned her attention to her true goal of bounty hunting, and established an identity as an attractive human female which was key to gaining contacts and winning the trust of her targets.

Zam had a supporting role in the 2002 action adventure video game Star Wars Bounty Hunter, which follows Jango Fett as he hunts down the Dark Jedi Komari Vosa and finds himself at the center of a death stick trafficking conspiracy. In the game, Zam is attempting to capture Bendix Fust, a Mordageen smuggler with a bounty of fifty thousand credits on his head who was imprisoned on the asteroid Oovo IV. Fett was also in pursuit of the smuggler, and the two bounty hunters form a reluctant alliance to escape from the prison. Fust in tow, Jango and Zam arrived on Malastar to deliver their target, but he fled and fell to his death in the factory producing death sticks. Throughout the game, Zam comes to Jango’s aide and even rescues him from certain death during a Jedi ambush. She also rescues him after his is captured and tortured by Komari Vosa, though she’s wounded in the process.

Bounty Hunting and Alliance with the Jedi

Five years after her initial adventure with Fett, Zam become a well known bounty hunter, carrying out contracts for the likes of Jabba the Hutt and the Black Sun Crime Syndicate. She was eventually tasked with tracking down the mystical artifact called the Infant of Shaa— however, Zam learned that the idol caused devastating explosions that could destroy a planet. Realizing that her client was intending on using the artifact on Coruscant, Zam traveled to Jango’s residence on Kamino, where she met his son Boba. Fett was initially unimpressed by Zam’s insistence that they needed to save the millions of lives endangered on Coruscant, stating that he had to protect his own son. Zam pointed out that thousands of sons were about to die in the coming catastrophe, and Fett reluctantly agreed to help her retrieve the idol.

During the adventure, the two formed an uneasy alliance with Jedi Master Yarael Proof and after a bloody fight, retrieved the artifact and handed it over to the Jedi, but the mortally wounded Proof died from his injuries sustained in the fight. The pair of bounty hunters returned the Infant of Shaa to the planet of Seylott and left the idol to be forever guarded by its people.

Zam and Fett would continue working together throughout the years, with their professional relationship developing into friendship. It was Fett’s trust in Zam and her abilities that lead him to contract her to kill Senator Amidala, but when she failed and was captured by the Jedi, Fett knew she might expose the conspiracy and promptly killed her. Fett regretted the action, and Boba, who’d come to see the Clawdite in a sort of motherly fashion, was deeply saddened by her death.

During her career, Zam assassinated some high profile targets, and made a name for herself as a skilled and ruthless bounty hunter. She was level headed and measured, but her motivations were clear: she was driven by profit and didn’t care which side of a conflict she landed on as long as she got paid. However, she also possessed a conscience and didn’t kill unless she had no other alternative to ensure her own survival or if was for a contract.

Behind the Scenes and Future in the Star Wars Universe

The character of Zam was played by actress Leeanna Walsman for Attack of the Clones, and she also voiced the Clawdite for the Bounty Hunter videogame. Zam was initially envisioned as one of the main antagonists for Episode II and would have appeared as Corporate Alliance Trooper (or C.A.T). Her first appearance in the Star Wars universe came in the one-shot comic, Star Wars: Jango Fett which released two months before the film. Zam is also a playable character in Lego Star Wars and can be added via mods for the original Battlefront II game.

With so many Star Wars projects on the horizon, it’d be great to see Zam make some sort of appearance, whether it’s new stories of her adventures with Jango Fett or her early days of bounty hunting in the Outer Rim. Perhaps she could appear in a supporting role in an upcoming novel or comic book about the vast numbers of Star Wars bounty hunters. Regardless, the character’s shapeshifting abilities and iconic purple look make for a compelling character.

What do you think? Would you like to see more of Zam Wesell in the Star Wars universe? Let me know in the comments. If you like my content, hit that “follow” button and feel free to share my work. As always, stay nerdy!