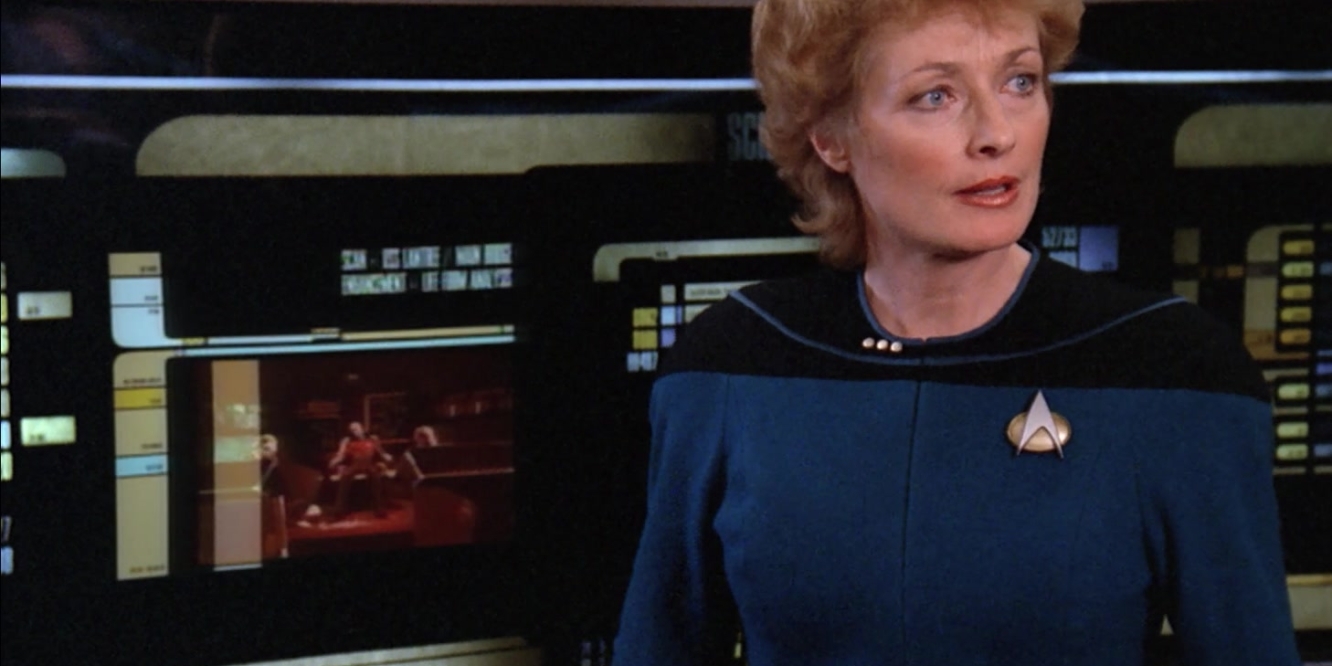 Dr. Katherine Pulaski is a name that leaves some fans of Star Trek going “huh?” while others respond with indifference or delight at Diana Mulder’s one season run as the Chief Medical Officer of the U.S.S. Enterprise. Unsurprisingly, she’s often included in the lists of the most hated or most annoying Star Trek characters–after all, she did initially treat fan favorite Data with disrespectful amusement and rattled Captain Jean-Luc Picard with her strict and rather unorthodox approach. She isn’t included in any promotional material, and she’s faded into the background of other famed characters –which is a shame, considering that while Dr. Pulaski’s tenure on the show and the Enterprise was short lived, she developed strong relationships with the crew and grew both as a character and professional.

Dr. Pulaski made her debut in the Season 2 premier, “The Child”. Her addition to the series came in the midst of behind the scenes tensions between Gates McFadden—who played Dr. Beverly Crusher—and the show’s producers. McFadden had raised concerns about sexist material on the series and was pushed out by one of the male producers. Her replacement came in the form of famed television actress Diana Mulder, known for her roles in Born Free and McCloud. She’d previously played two characters in the original Star Trek series—Dr. Miranda Jones and Dr. Ann Mulhall, so she was no stranger to the Enterprise or the Star Trek universe.

Right off the bat, Dr. Pulaski raises the eyebrows of the crew and in particular, Captain Jean Luc-Picard, who finds her in ship’s lounge, Ten Forward, after she fails to make an appearance on the bridge. Picard is initially stunned by Pulaski’s lack of protocol and perceived rudeness, but the Doctor is on a mission within the first few hours of her stepping foot on the Enterprise. The ship’s counselor, Deanna Troi, became heavily pregnant overnight, and she naturally turns to Dr. Pulaski for help. While the rest of the senior crew debate what to do with Troi’s pregnancy and consider termination–without even asking for her input–Dr. Pulaski treats the ship’s counselor with kindness and respect. Her warmth comforts Troi, even to the point of Troi later thanking the Doctor for help. When Troi gives birth and her son ages into adolescence within hours, Dr. Pulaski is intrigued and even a little concerned, but she treats both mother and child with care and rapt attention–after all, she’s a doctor and they are her patients.

On the bridge, Dr. Pulaski emotes none of the warmth she displays in sickbay, rather, she’s frank and to-the-point. She’s clearly intelligent and professional and knows her strengths; she’s confident in her abilities but not arrogant (at least, not at first). It’s her initial interactions with Data which raise the ire of many a Star Trek fan, and it’s not hard to see why. She mispronounces Data’s name (as “DAT-ah” rather than “DAY-ta”), and when the android attempts to comfort Troi in sickbay during the birth, Pulaski interjects.

“Counselor Troi needs human touch, not the cold hand of technology,” she chides, but Troi quickly jumps to the defense of her friend, granting him permission to keep her company. As we learn later, Dr. Pulaski is somewhat of a technophobe, a trait which often draws parallels to much more popular Dr. “Bones” McCoy. She’s afraid of transporters (and really, who can blame her? Look how many accidents and gruesome deaths they cause throughout the franchise) so she uses a shuttlecraft whenever possible, and she’s initially curious of Data, and must get used to him. Remember, most people don’t associate Data with the level of humanity the Enterprise crew (or the fans) knows he has. Pulaski genuinely sees Data as the work of science and technology he is. She believed his logic and methodical way of surveying any situation means he can’t solve a traditional Sherlock Holmes mystery (which inadvertently leads to the creation of sentient hologram, Professor Moriarty in the episode “Elementary, Dear Data”). She was condescending to him and often spoke indirectly to him in conversations with other crew members, but as she grows to know and understand him, she grows to respect him, overcoming her initial amusement and distrust of the android. This developed from Pulaski’s mission with Data to the Darwin Station in the episode “Unnatural Selection”.

In the episode, the Enterprise receives a distress call from the USS Lantree and finds it adrift in space, with the crew having mysteriously died of old age. Picard and the crew follow the Lantree’s last call to the Darwin Genetic Research station and discover that researchers are rapidly aging. They beg the Enterprise to allow the genetically engineered children they’re working with onboard, but Picard is rightfully wary of exposing his crew to any virus or outbreak. Dr. Pulaski convinces Picard to allow her to work with the children on a shuttlecraft, and recruits Data to help her, believing that the android won’t get infected. She’s harsh but determined in this episode, and we see the more arrogant side to the new ship’s doctor. But arrogance in the Star Trek universe is nothing new–look at Riker, or even Worf. Pulaski is humbled when she becomes infected after working with the children who are revealed to transmit the virus, but she’s touched when Data offers to stay and work with her to find a cure. It was one of the first episodes where the viewers start to see a shift in Pulaski’s relationship with the android. She’s grown to know and respect him, and we see the evolution of their relationship throughout the season.

Similarly, while Pulaski’s relationship with Captain Picard was less than ideal–they butted heads on a number of occasions, like with the crisis at the Darwin Station–but the Doctor does respect Picard and jumped at the opportunity to serve with him on the Enterprise. She even saves Picard’s life in the episode “Samaritan Snare” when Picard must replace his cardiac implants and complications arise with his surgery. The team calls in Dr. Pulaski, who uses her medical expertise to stabilize the captain.

Dr. Katherine Pulaski is a character who started off on rocky footing with the rest of the crew, but it takes work to develop meaningful relationships with your collogues, and the good doctor was one of the first characters who defied Gene Roddenberry’s initial storytelling beat of no conflict between the characters (Tasha Yar also defied this and the show killed her off). As famous and beloved as some Star Trek characters are, the lack of conflict within the crew was kind of boring. Pulaski had a clear character arc in her one season alone, and proved she was up to the task of earning the respect of the crew. Had she remained with the show longer than one season, Pulaski would have felt like a natural member of the Enterprise. It was great to see the return of Dr. Beverly Crusher, who is beloved by both fans and the cast of the show, but it’s hard not to feel that the series dropped the ball with Dr. Pulaski who’s slowly faded into obscurity.

What do you think about Dr. Pulaski? Would you like to see her return in some form to the Star Trek universe? Let me know in the comments and as always, stay nerdy!

One Reply to “In Defense of Star Trek TNG Dr. Pulaski”