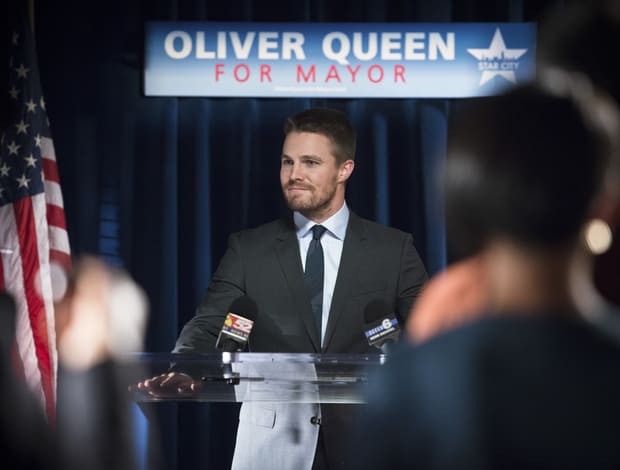 This evening I was catching up on one of my favorite television shows, Arrow, and just finished an episode which dealt with the aftermath of a mass shooting and touchy subject of gun control. Arrow, which is currently in its fifth season, is a modern take on DC’s Green Arrow, and tells the story of a rich playboy, Oliver Queen, who, after five years of being stranded on an island, returns home to Star City to fight crime with a bow and arrows.

In the episode, a man goes on shooting spree in the city council building, killing seven people and injuring many more. It leaves the characters on both sides of the gun control debate, with some vouching for a city wide gun registry while others denounce the government tracking private citizens. At one point, one of the characters announces that, as a black man, he is three times more likely to get shot, and must live with that fear hanging over his head.

Arrow has mostly been apolitical up until this point, while other DC shows that exists in the Arrowverse like Legends of Tomorrow and Supergirl have addressed issues like racism, sexism, and xenophobia. It is not a new concept for television shows to weigh in on national conversations around social and political issues, with some shows having more subliminal messages than others.

In the past few weeks, I have noticed that some of the shows I watch have delivered strong messages reflecting the current political climate. Jane the Virgin took a stab at Donald Trump and his inapproriate comments and behavior towards women.

In Riverdale, a black student and lead singer in a band, tells her white friend that she has had to fight her whole life in never ending battle where she is positioned on the loosing side because of her skin color.

Television is a medium which allows storytellers fluidity and creativity when it comes to delivering messages to the masses. We have entered a new age in entertainment where issues like race and gender can be discusssed and where a film or show can tackle these issues and be seen as the norm instead of controversial.

One Reply to “When Non-Political TV Shows Tackle Politics”