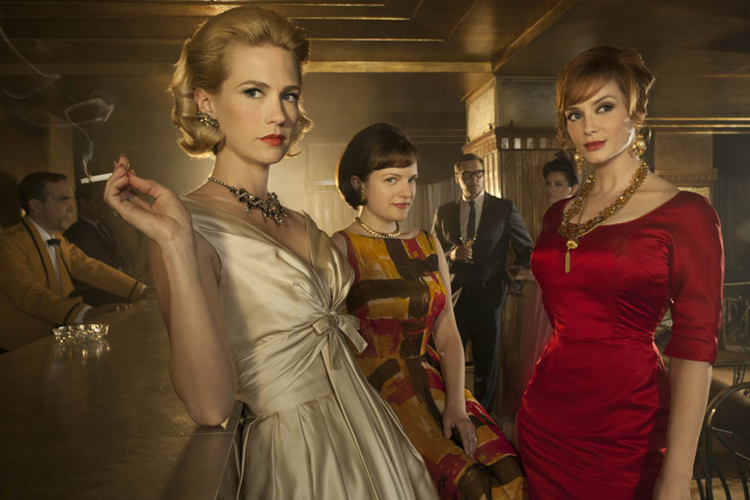 The “Jaguar Pitch”, scene that appears in a season 5 episode of Mad Men, is a perfect example of Laura Mulvey’s concept of the “male gaze”, a masculine point of view across movies and literature in which women are presented as the objects of male pleasure. Mulvey states that the female characters have no direct influence on the plot, and merely serve as a support or a sexual object for the male.[1] The scene demonstrates Mulvey’s ideas in two ways: Joan’s interactions with Herb Rennet in which Herb is the looker and the surrogate for the male audience, and Don Draper’s calculated speech containing undercurrents of female submission to male dominance.

In the scene, Don addresses the executives of the Jaguar account, which mirrors Joan’s night with Herb, a man who can back up Don’s bid for the account in exchange for sex with Joan. Don is unaware of the arrangement, and arrives too late to save Joan from sleeping with Herb.

The scene opens with Don delivering his pitch. The camera keeps him in a medium shot, allowing the audience to see his calm yet calculated posture and hand movements, establishing that he is in control and has his male audience listening to his every word. Occasionally, the camera zooms in for a close-up of Don’s face to convey his earnest yet wistful statements about the Jaguar’s perfect and almost unobtainable status. However, there is more to Don’s pitch than the Jaguar’s perfection and desirability.

Related: All Men Must Die: The Rise of Women in Game of Thrones

His speech is full of insinuations regarding a male’s desire to possess a beautiful woman, with the Jaguar serving as an analogy of that possession for pleased executives. Don states that they must tire over hearing how beautiful the Jaguar car is, but explains that he has met several beautiful women who, despite their protestations, never tire of hearing how beautiful they are. He only refers to women once during his pitch, but the connotative meaning of Don’s speech is clear; women are possessions, and they are not entirely out of the reach of the male grasp.

In her lecture on the male gaze, Dr. Erin Hanna touches on the idea that man (Herb) is the bearer of the look who advances the narrative and controls the fantasy, while the woman (Joan) is objectified; she freezes and slows the narrative.[2] In the scene, Herb says he doesn’t know if he can control himself much longer around Joan, implying that he is ready for the sexual act to begin. Joan slowly takes a drink, then begins to unzip her gown, when Herb quickly and eagerly reaches for her back and finishes the job.

In several occasions throughout the scene, the male audience experiences narcissistic scopophilia; the pleasure in identifying with the male characters on screen. Don Draper is cool and confident, and assures his male viewers that women are beautiful creatures to be owned,  while Herb is controlling over a beautiful woman.

The “Jaguar Pitch” ensures that the male audience will be able to identify with Herb and Don, while enjoy the sexualized character of Joan.

Mulvey’s theories on the male gaze ring true in the ways that Don speaks of women; Herb interacts with women; and the male audience engages with the scene and views the male characters versus the female. Mulvey states that a female actor is never meant to represent a character who directly influences the plot, but serves as a support to the male role and bear the burden of sexual objectification that he cannot.

I'm a pop culture enthusiast and gay writer out of Oregon. View all posts by Mack Veltman

One Reply to ““Mad Men” and the Male Gaze”